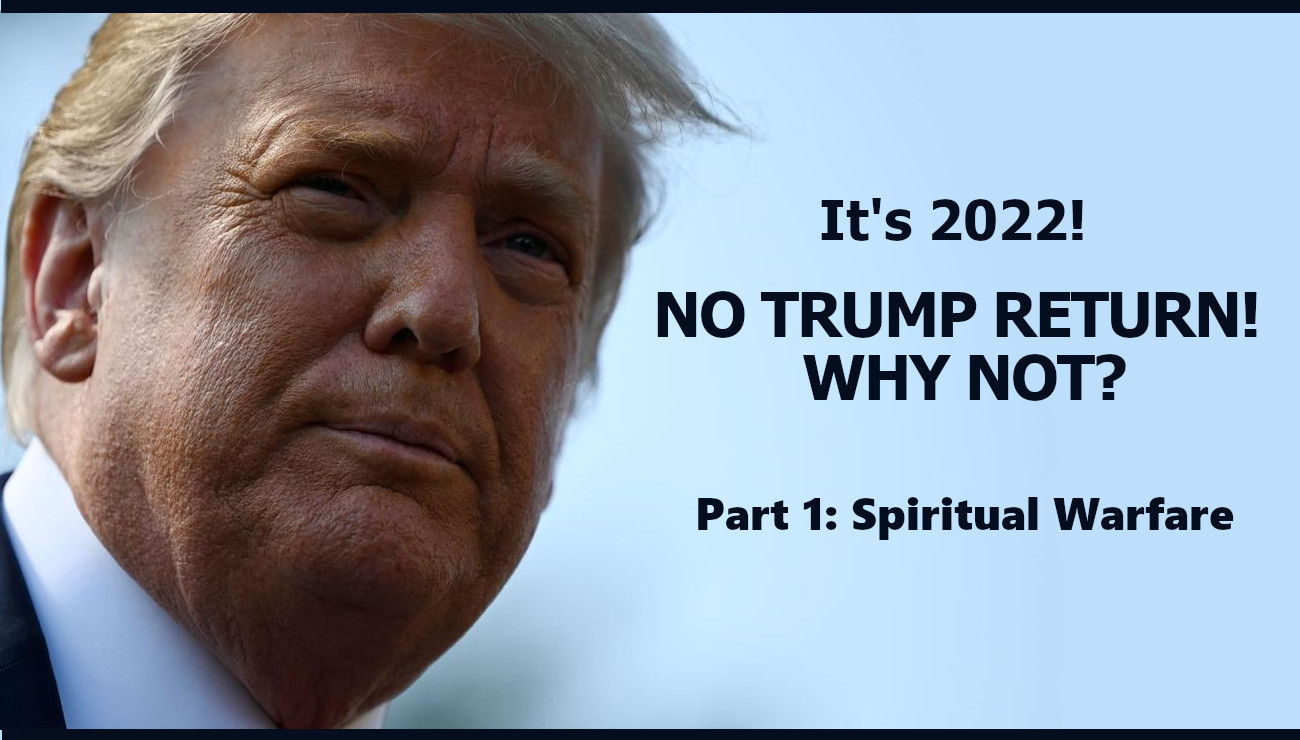 WE ARE WINNING! God gave me an encouraging insight into what's going on in the Spirit World while we await Trump's return to the White House and the end of this global madness.

There are many Christians lamenting the length of time it’s taking for Donald Trump to return to the White House, as many prophets have said. Each day we see the Joe Biden regime actively taking steps to destroy the Republic of America and it’s heartbreaking.

No wonder we’re groaning. But, the Lord gave me the spirit of discernment this week, in which I was able to see and hear the spiritual warfare taking place over America and the world. God gave it to me to encourage us to keep pressing in for the answers to our prayers.

The first insight I received was shortly before 3 am one night this week. I awoke to this conversation taking place in the spirit realm between demonic and angelic forces.

A Demonic Voice Boldly Declared
“We are in control over all the earth!”

When the demonic voice said that, I took it to mean everything about tyrannical government leaders pushing covid restrictions, lockdowns, vaccination mandates, concentration camps, loss of rights and freedoms that are taking place worldwide. Today, every nation seems to have been impacted by these controlling spirits, which were sent to cripple economies and destroy national sovereignty and borders to prematurely force us into a One World Government. But, thankfully, God’s angel responded this way:

The Triumphant Angelic Voice Responded
“We’ve come to judge you!”

When the angelic voice said they’ve come to judge them, I took it to mean that the demons’ days of undisturbed and unjudged tyranny over the world with covid lockdowns and mandates was over.

Thankfully, God has not forgotten our cries for Justice and Judgment. It’s been a long fight in the spirit it seems, fighting for America and the world. But Scripture also shows instances of prolonged spiritual warfare from the past:

Daniel sought God for answered prayers but had to endure 21 days of spiritual warfare in the heavenlies until the answers came through (Dan 10:10-14). The important note of distinction was that Daniel remained faithful until the answer came to pass.

We don’t know how long this present spiritual warfare will last, but please know assuredly that the high princes of the demonic world controlling events in the world are being judged now!

Scripture shows that God has often used His angels to bring Judgment. Here are a few instances:

Psalm 78:49, He sent upon them His burning anger, Fury and indignation and trouble, A band of destroying angels.

Gen 19:13, For we will destroy this place, because the cry of them is waxen great before the face of the LORD; and the LORD hath sent us to destroy it.

Immediately after receiving this supernatural eavesdropping, I began praying into what was given. I also turned my attention to the spirit world and told them that they had lost this battle and that they needed to unclasp what they’re holding onto and retreat. I reminded them that judgment is upon them and that they have lost the battle. I felt a keen anointing when I prayed for the dismantling of all tyrannical operations undertaken in all the capitals of the world.

And this is the way we need to pray. We need to speak forth the insights the Lord gives us. Try to pray as Pastor Mike Thompson instructs, using “Third Heaven Authority.” Prayers. See the series here.

Then, upon waking up in the morning, I had another significant insight. I heard demonic voices uttering vulgarity over their dismay that they are being forced to retreat.

God then encouraged me about the effectiveness of our prayers in this spiritual warfare. This morale-boosting is both for me and you!

I saw a sky littered with satanic UFO’s, which were driven by generals operating within the second heaven. It was these generals who were commanding the lower demonic forces to control the nations with lockdowns and mandates.

Meanwhile, on the earth, I saw intercessors holding long ropes tied to these airborne vessels and bringing them down. This literally resembled to me the “pulling down of strongholds” as it says in 1 Corinthians 10:3-4: For though we walk in the flesh, we do not war according to the flesh. For the weapons of our warfare are not carnal but mighty in God for pulling down strongholds.

Friends, our prevailing prayers are very effective. The earnest prayer of a righteous person has great power and produces wonderful results (James 5:16 NLT). We are seeing the results but we need to keep pressing forward in prevailing prayer until our prayers are fully answered and manifested in the physical.

For Christians, this shouldn’t be a show or spectator sport. We don’t sit back and see whether what the prophets have said comes true or not. We are instructed to actively engage with the prophetic word of the Lord and speak it into reality. Your voice of faith must pierce through the darkness of the times we’re in, against the towering obstacles resisting God’s plans, and against the foreboding mountains standing in the way of truth, righteousness and justice, and prevail!

One day the Lord prompted me with this astonishing line: Plans of the Father ceased to exist!

Wait a second! I have been waiting years for God’s plans to become realized in my life. What do you mean, Lord, that they’ve ceased to exist. I’ve been waiting and waiting on these things.

Then the Lord rephrased the line for me, changing the entire meaning with one word: Plans of the Father seized to exist!

I knew immediately what He meant. I’ve been waiting and waiting as if this was a spectator sport for God to fulfill His destiny in my life. But that’s not enough. I need to actively press into prayer, seizing God’s plans into reality.

We do not want you to become lazy, but to imitate those who through faith and patience inherit what has been promised (Heb 6:12 NIV).

We seize upon God’s plans in our lives – and the plans God has for America – when we believe what He says in prevailing prayer!

How do we seize upon God’s promises? By FAITH.

Therefore I say to you, all things for which you pray and ask, believe that you have received them, and they will be granted you (Mar 11:24 NASB).

That is the point the Lord was making to me. I need to pray like I really believe that what He said shall come to pass, and not just sit things out with the result that nothing happens. God wants me to be fully engaged with His plans for my life so that I not only believe in them but take part in bringing them to pass.

This is why sometimes our prophetic words fall by the wayside. There was no one to pick them up and carry them over the finish line.

The truth of the matter is that the words that come out of our mouths give activating power to the angelic realm to strike and pulverize the targets. The angels are always awaiting partnership and commissioning by our words!

We are blessed by living in this chaotic hour. Not only has God decreed that we’re alive now, but that we’re actively involved in victoriously bringing God’s plans for America and the world into reality.

Therefore we pray defiantly that the demonic hordes in the world seeking to destroy the nations are right now being judged and removed. And we will see Donald Trump fulfill the plan God has given him to literally preserve the world.

Believe the prophets and you shall prosper.

In the next chapter we’ll discuss the Timing of God. If you’re looking to and blaming Donald Trump for not moving fast enough, you’re already misunderstanding things. Trump is not in charge of the timing – God is! In the meantime, praise God for letting us be a part of this wonderful global Awakening and end-time harvest that Satan cannot stop.

Almost immediately after we received this word about the demonic being “judged,” the entire deep state narrative seemed to unravel before us.

Project Veritas put out a video on January 10th, proving that Anthony Fauci lied about his involvement in gain of function research and the origins of COVID-19 emanating from Wuhan, China.

From here on end, we’re going to see the dissolution of the Deep State narrative.

January 13th was momentous for many reasons, primarily because the Supreme Court rejected the Biden regime’s vaccination mandates on large companies.

For this and for many other news items, reporter Jack Posobiec stated, “Today was historic. We saw the end of the Biden Administration. The collapse is complete.” 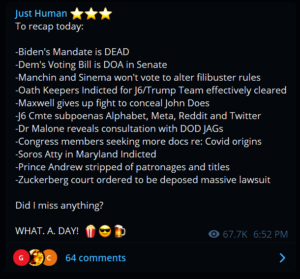 News Nation, a non-biased news source put out a poll on January 13th, showing the Biden regime is cratering:

Question 12 in the poll asked this:

When it comes to information about COVID-19, which of the following sources would you say you trust? Select all that apply. (margin of error: 5.8%) 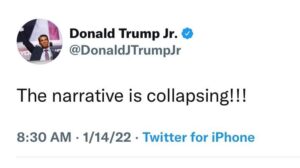 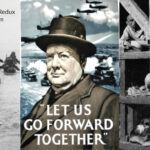 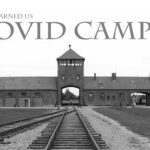